He's Justin Trudeau, leading fight to stop our climate change,
Calls CO2 "pollution." Carbon tax he will arrange.
As Al Gore's Inconvenient Truth stokes Oscar-winning fear,
Catastrophe is looming if the bar we do not clear.

But in Two Thousand Nine, the fraud's exposed in Climategate,
Where Michael Mann used "trick to hide decline" since 'Ninety-Eight. 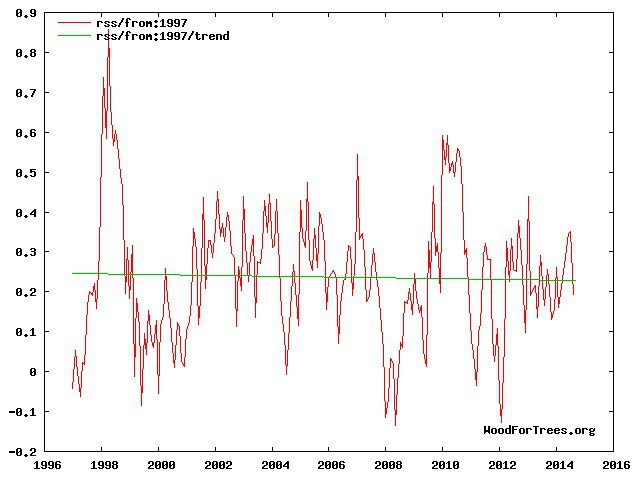 Won't show the court his data to his hockey stick graph clear,
Caught fudging numbers so the warmer times would disappear:

Their hang-out limited admits a "Pause" in rise, benign,
Yet "trick" was not to hide a "Pause" but trick to hide "Decline."
Mann says trick means just "clever" scientific way to go,
It's not the "trick" but it's the "hide" affronting ethics so.

Since World War Two when human CO2 began to rise,
Next 30 years the temperature still went down! Surprise!
While CO2 continues spike now, temp'rature's declined!
So CO2's not driving heat, conclusion we must find.

Now more than 20 years of pause shows broken hockey stick,
Yet still hypnotic headlines push to hide decline the trick.
What fool believes it's warmer now than when Greenland was green?
But fools abound to state in public: "Warmth we've never seen."

When Global Warming paused, the doomsters had to change the name,
To "Climate Change" so either up or down, they win the game.
Real temperature's measured in "Degrees" where up's more hot,
But up some "Climes" of Climate Change are units never taught.

"Let's stop climate from changing" seems too stupid to believe,
Til they admit it's really warming problem they perceive.
Since "Climate Change" means really "Warming," doesn't mean a "Freeze,"
So why'd they change the name when it's still measured in "Degrees?"

If they had stuck with "Global Warming," as degrees went down,
A mere thermometer would show they've played you for a clown.
Our mantle crust on molten iron ball that keeps things hot,
Means our volcanoes made up most of CO2 we got.

The scientific journals censored all the truth who knew,
While William Connolley at Wikipedia did too!
All honest research faced corrupted peer review to win,
While prostitute researchers furthering the scam got in.

With thirty thousand-scientist petition to deny,
"That humans are to blame. It's ball of fire in the sky!"
It's claimed "Percent of 97 scientists agree,"
But nine hundred'n seventy thousand signers we don't see.

"Deniers" is the label put on those who disagree.
Though none deny that climate changes which must always be.
We skeptics do deny much change is of man-made effect,
Our lots more CO2 won't temp'rature too much affect.

When heard "it's settled science, no one else need have a say,"
They can't have winning cards or they would put them into play.
Though a minority opinion isn't often won,
When right, it always starts with a minority of one.

On Youtube see the very best debunker we can boast,
The engineer par excellence is Tony Heller most.
Exposing data rigging of the stats to pull it off,
With intellect superior, with always winning scoff.

As Youtube showed David Suzuki crushed for all to see,
He couldn't even name the data sets on Oz TV.
He wants to jail those he can't beat in open fair debate,
"I was arrested in the Soo!" kept shut up by the State.

Professor Keating flaunted "Thirty Thousand Dollar" bet,
"None can disprove that climate changes." Safe as it can get.
Since climate always changes, it's a bet no one can meet,
A false bravado with but only one sure way to beat.

So Great Canadian Gambler raised him unexpectedly:
"A Hundred says next year is colder, measured by 'Degree.'"
Though flashing Thirty Gs on wager that could not be faced,
He folded to my C-Note raise. My post he then erased.

If heard "None can disprove my claim that Martians will invade,"
Just say "I bet they won't next month!" to watch the scammer fade.
The liars backing down from public bet lose "Trust-Me Cup."
"Cash says: Won't happen soon!"'s the only way to shut them up.

G20 leaders pledging to the change in climate stop!
And only Donald Trump with brains enough the scam to drop.
"Where wind-chill temperatures in the beautiful Midwest,
Reach coldest ever minus 60." Quite the frosty fest!

"So what the hell is going on with Global Warming line?
Please come back fast, we really need you!" Polar bears are fine.
Sea level rise since little Ice Age still unchanged remains,
With glaciers growing well, no extra fires or hurricanes.

Greta Thunberg leading youth say: "Save environment,
By cutting plant food CO2." Wrong fix to implement.
We all want clean green energy, til then burn oil and coal.
With CO2 no problem, cleanest burn's the only goal.

Sure, it hurts to learn that you were taken by the hoax,
But aim your anger at its shills who so your trust did coax.
When all authoritative voices told you it was so,
It's tough with major topic current thinking not to go.

When you hear those who disbelieve on public waves reviled,
So let it warn that you should not be once again beguiled.
"Stop having children" hoaxers hope believers to induce,
Yes those still easily hoodwinked best never reproduce.

Sun-spots have disappeared, a mini Ice Age on the way,
With Engineering drop-out onto whom the blame we'll lay:
So Trudeau's culpable by peddling untrue warmth reports,
For every schmuck found frozen dead still in Bermuda shorts.

With "Scientists" who hid decline, their data, won't bet too,
Til Greenland's green again! Do question what they said they knew.
Still fooled by trick to hide decline, still Justin leads the way,
"I tried to stop climate from changing" on his resume.

20120401 $100 ClimateGate bet "Temperature Went Down" taken by Green Party Adriana Magnuto-Hamu http://www.youtube.com/watch?v=bdtKw0NhWY8  Jct: During the Toronto Danforth federal byelection, at the Applegrove debate, I bet $100 Mann-Made Global Warming is a lie and temperature went down. At the Don Mills Debate, I bet again and Green candidate and climate critic Adriana Magnutto-Hamu took my bet and tried to explain what decline they were really hiding. Either we have a live debate where the loser picks up the tab for the hall or we can have an online debate with duelling documents. Stay tuned at http://facebook.com/john.turmel Index of videos at http://johnturmel.com/kotp.htm She said:  "I took your bet. I also want to point out that John is deeply mistaken about what "hide the decline meant." It's funny. People think that "hide the decline" means that there's a decline in temperature. That isn't actually what they were referring to.They were actually talking about, and I know this because I'm the climate change critic for the Green Party, what they were referring to was actually a decline in what should have been the temperatures based on the tree ring data. When temperatures were actually going up. That's what they wanted to hide. Because they'd been using tree ring data to recover, and I do think that this is a problem, I do think that it sheds some kind of problem into the science and I am looking into it. But there is a lot of strings that show that climate science is right. But the truth is that what they were looking at was that the tree ring data had been matching, correlating with the temperature for many years, but it was going down in the last 20 years as temperatures were going up. And that's what they wanted to hide. They hid it by, at that point, saying, you know what, we're going to use the real temperatures from now on because we don't trust the tree ring data. That's what they referred to. So you're wrong. And the temperatures are going up." Turmel: You took the $100 bet, we'll have a debate.

http://youtu.be/pl71od5UoPo  MSNBC's Chris Hayes brown-nosed the man who came up with the "trick to hide the decline" in global temperatures, the notoriousMichael Mann who fudge-factored the Medieval Warm Period and Maunder Minimum out of his fraudulent hockey stick graph out of his hole giving me the chance to comment! Har har har.

20170605 Turmel: Calling Global Warmistas "Idiots & Clowns" gets election candidate arrested https://youtu.be/E5Ziu2qVL1w  Jct: May 30 2017 Sault Ste. Marie provincial byelection Chamber of Commerce debate where "What kind of idiot could believe it's warmer now than when Greenland was green?..." and "Clowns who believe in warming" was deemed "unacceptable language" and I was barred from any further response. It took a gun and a badge.
johnturmel@yahoo.com
50 Brant Ave. Brantford N3T 3G7 Tel: 519-753-5122 Cell: 226-966-4754